Photography has an inevitable relationship to time. All images, consciously or not, end up being about time and reflecting the era they were made. The making of photographs, especially within the context of project-based practice, concerns time on another scale, often seeing a photographer engage in cyclical repetition, rework and rediscovery of a place, subject or approach. While for many books, time is a peripheral (or unacknowledged) concept, Lynn Alleva Lilley’s most recent book Deep Time signals from the outset a more literal and exploratory approach to one of the most fundamental aspects of photography.

When looking through Deep Time there are a few elements that are immediately obvious. The book is divided into eight chapters and re-traces several subjects through a variety of images: water, sun, moon, horseshoe crabs and time. A flick through would show a reader a mixture of archival, still life, landscape and microscopic images, as well as many passages of text.  This book is a real departure from Lilley’s earlier work Tender Mint, a collection of images from her time in Jordan. Deep Time is a definite step in a new direction for the maker.

Deep Time explores a multiplicity of subjects at one site – Delaware Bay – that relate back to time. The book opens with images of the surface of the water, tides ebbing and flowing before moving to the most unique aspect of the book: horseshoe crabs. Lilley’s photographs show readers these crabs as they appear on the surface and return in their own ways to the shore, to the water, to death and to reproduction. The creatures are used as subject to ground an intangible subject (time) with a physical subject (the crabs); as one of the most ancient and primordial creatures, horseshoe crabs tie the work made in the present with stretches of time vastly beyond humanity’s own.

Through this, Lilley shows readers the ways that time overlaps, not just in daily cycles, but in seasonal, yearly and generational cycles. Archival images allude to the relationship between the animals and humans grounded in our perception of time: massacring them for short term gain as fertilizer. As the book moves through its chapters, further subjects relate back to time: in particular the sun and the moon. What makes this an ambitious departure for Lilley is the way that she layers different subjects, allusions and notions of time in a single work: many of the subjects relate to each other thematically, and the visual and literal language used often shifts and moves between different modes, scales and forms to capture the complexity of time and its pervasive and evasive nature.

The strongest of the images would definitely be those made of the surface of water. Her use of depth of field is so precise and considered it feels like the water can be touched, as if it would have a non-liquid texture. So many of her images of waves, ocean and light on the surface are almost tangible in their execution. Of similar strength are the images she has included of moon and sun which are often incredibly considered and really sing. While there are some of the cliches we all know (violent sunrise, ominous moon) there are many playful iterations of how we look at the same two objects so many times. These images speak so clearly to Lilley’s exploration of the necessity of repetition as a fundamental of time and the unsurprising way that routine leads to difference and surprise.

Lilley shows us that not everything dies, that time sustains and continues, that there are things we see everyday that will outlast us.

Another strength of the book lies in its paper choice and printing. Instead of opting for a heavy, plastic laden glossy stock, Eriskay have used an uncoated and lighter paper (Arcoprint Milk White); especially for the landscape images the texture of the paper just works so well. The colours are rich and the book is a joy to actually touch and look through, something I find fewer publishers are attentive to.

While it seems to be somewhat of a hallmark of the Eriskay Connection – to ambitiously work with overlapping visual languages and substantial text – this often leaves some portions of the book feeling unfinished. There are 8 chapters and I could not help but read several of them as redundant, often reaffirming content that had been well executed elsewhere in the book. While I realise that a book about repetition will have some repetition in it, there were sections of the book that felt laboured and forced. One example was the chapter titled ‘The Observed’. It’s the second last chapter and returns the book to images of horseshoe crabs, yet there have been so many of these images that I wondered what this chapter added at all. Additionally, large sections of microscopic images of horseshoe crab embryos suspended in the ocean felt somewhat superfluous to the examination of scale as a factor in the passage of time. In both cases, the images were not the issue, rather the repetition of something already explored earlier in the book felt a bit clumsy.

Similarly, there were a few times archival images and images from museums just felt illustrative of the text, and the text expository of the images. I felt these sections offered much less than others, often reading as clumsy and slow, rather than tactile and loaded with allusion. I welcome the ambition to combine so many complex elements, but feel a more rigorous edit would have benefited the work tremendously.

That is not to say that the images are bad or that the photographs are boring. While I felt that there were one or two chapters that didn’t add much photographically they always had a relevant thematic point and brought something new to how Lilley was exploring time. The microscopic images speak to life cycles and the connection between the ocean and the moon. Lilley is being deliberate here and these chapters do expand what Deep Time is doing conceptually.

This book is loaded with potential and when the work is on it is on. There are parts that just blow me away: raindrops frozen hitting the ocean, a young girl shining a light on a crab, crabs swimming just at the surface, barely breaking the tension of the oceans’ edge. There’s something uncanny about Lilley’s approach, something that reminds us of time’s elusiveness and humanity’s inability to really judge what time means, what different consciousness is and of the problems of our short attention span. Lilley shows us that not everything dies, that time sustains and continues, that there are things we see everyday that will outlast us and when the book works at its best it’s a call to humility, to acceptance of the happenstance of our lives, our existence, our species. The book, ultimately, is an ambitious project that successfully incorporates dozens of jaw-dropping photos in an exploratory and risk-taking way. While not everything succeeded for this reader I cannot help but feel impressed with much of the imagery and how Lilley has used photographs to unpick something so ubiquitous and ephemeral as time. 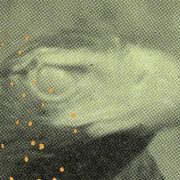 An Interview with Matt Dunne 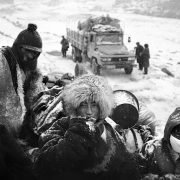 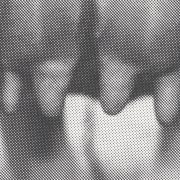 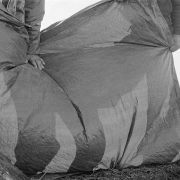 Eva Louisa Jonas – Let’s Sketch the Lay of the Land 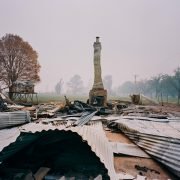 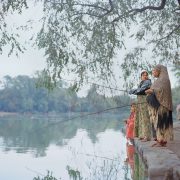