For a medium with such a short history, it’s surprising how quickly certain figures in photography’s recent past seem to vanish from the timeline. Minor White, for instance: if his name comes up at all, it often brings to mind a slightly whimsical figure – a snowy-haired mystic whose modernist ideas of the image as an expression of the photographer’s inner life feel naive and outdated. But White – as a photographer, teacher, critic and editor of the journal Aperture – was an influential presence in postwar photography. From the 1940s until his death in 1976, he was a powerful advocate of photography as an expressive medium, and the undisputed frontman of the photography scene on America’s West Coast.

By the early 1970s, though, the idea that photography should be pursued for its metaphoric capabilities was losing ground with a generation of younger practitioners. Among these was Lew Thomas, a self-taught photographer who came to the medium from a career as a book dealer. Initially inspired by photographers such as Paul Strand and Walker Evans, Thomas later rejected modernist notions of photographic authorship and turned instead to the work of conceptual artists like Michael Snow and the structuralist theory of French anthropologist Claude Lévi-Strauss. From 1971 onwards, he abandoned pictorial imagery in order to focus on the relationship between photography and language.

Thought Pieces – the catalogue to a 2020 exhibition held at the San Francisco Museum of Modern Art – is a retrospective look at the work produced by Thomas and two of his young collaborators, Donna-Lee Phillips, and Hal Fischer. The three met in San Francisco in the early 1970s and worked closely together for about a decade, producing books, exhibitions and critical texts.

San Franciso was a hub for innovative photographic practice. By the 1970s, critical discourse around photography was starting to move away from modernist ideals of originality and connoisseurship, and towards more theory-driven encounters with structuralism and semiotics – the study of sign systems through which meaning is created and shared. Though their work was aesthetically very different, Thomas, Phillips and Fischer shared a concern with photography’s links to conceptual art and contemporary philosophy, and with its status as a language, or at least, as a set of visual signs that relied upon linguistic structures in order to give them meaning. All three used grids, series, and image/text combinations as a way of pushing past the limitations of the single, pictorial image. Thomas, in particular, was fascinated with the reduction of the photograph ‘to the level of the idea’ – a vehicle for the transmission of information about the medium itself.

What’s especially striking is how playful their practice is, how fluid and unsystematic structuralism actually turned out to be.

Formal critique presented subjective value judgements as impartial assessments of quality. Semiotics, on the other hand, appeared to offer a way of finding objective meaning in the absence of any other context. Phillips’ 1976 essay ‘The Photograph’ – which describes an image in minute detail whilst commenting on how little certainty any of this information provided – is an implicit validation of a critical method based in shared systems of meaning rather than individual opinion.

But an ostensibly rational approach to image-making presented its own contradictions. While conceptual artists like Sol Lewitt based their work in mathematical processes, Thomas, Phillips and Fischer all relied closely on personal experience as the foundation of their practice. Many of Thomas’s grids and series explored the perception of everyday objects and events. Phillips’ work, which drew semiotics into dialogue with feminist thought, was grounded in her own reality, engaging explicitly with the way that emotion, for instance, shaded the meaning of both image and word. For Fischer, whose work focused on his life as a gay man, rationality could never be fully teased apart from more affective dimensions like desire. What’s especially striking is how playful their practice is, how fluid and unsystematic structuralism actually turned out to be. In this respect, their late work drew closer to ideas that would eventually be gathered together under the banner of poststructuralism.

Thomas was an agitator, intent on demonstrating that an artist could operate outside of the elitism of the gallery system. In 1975, he and curator Carl Loeffler organised the exhibition West Coast Conceptual Photography at alternative art space La Mamelle in San Francisco. Together with Phillips, a talented graphic designer, he founded NFS (Not for Sale) Press, which published several groundbreaking books between 1976 and 1981. Initially, at least, Thomas revelled in the poor response to their work. But he’d touched a collective nerve, and within the space of a few years, the trio had attracted the attention of artists and critics across North America. Three of NFS Press’s titles became classics shortly after their publication: Thomas and Phillips Photography and Language (1976), Fischer’s Gay Semiotics (1977), and Thomas’s Structural(ism) and Photography (1978). By 1981, Thomas, Phillips and Fischer were no longer outsiders.

Thought Pieces is a timely reminder that the recent history of photography is not just a history of image-making, but also of the critical discourse that emerges alongside it, and of the relationship between the two.

Today, structuralist analysis is so deeply embedded in the way we think about photography that it’s easy to forget how profound a challenge it posed to the bourgeois roots of traditional fine art photography. For a generation of photographers, the work of Thomas, Phillips, Fischer and others paved the way for a wider acceptance of photography as a form of political discourse. Within a few years, however, what had begun as a radical alternative to institutional modernism was already falling back into the very elitism it had sought to escape: by the 1980s, it had hardened into what UK critic Simon Watney, in his 2006 essay ‘Tunnel Vision’, termed a ‘stockade mentality’ – a critical programme that treated photographs as ‘weak or failed propositional linguistic utterances, rather than being in some important sense, direct traces of reality.’ In its early years, however, photography’s alignment with language was revelatory – a completely new way of thinking about images and image-making.

Thought Pieces is a timely reminder that the recent history of photography is not just a history of image-making, but also of the critical discourse that emerges alongside it, and of the relationship between the two. For Thomas, Phillips and Fischer, the very ideas that represented a route out of modernist convention were soon absorbed by the same institutions that they sought to challenge. Even in today’s networked world, various forms of institutional gatekeeping mitigate against extended engagement with photography’s new critical landscape. Market forces encourage rapid production rather than prolonged reflection. Innovative thought is often commodified as knowledge behind institutional paywalls, or played out as keyword disputes on social media. Before we can re-immerse ourselves in debates around photography, we also need to look for new ways to make these debates happen. 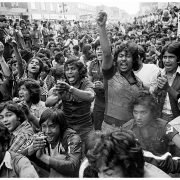 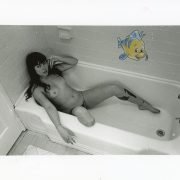 Kingsley Ifill and Danny Fox – Eye for a Sty, Tooth for the Roof 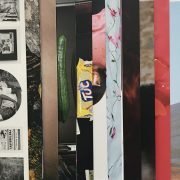 Unboxing Photoworks’ Festival in a Box 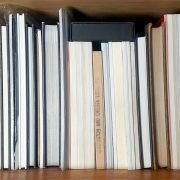 Books That Rocked Our World in 2020 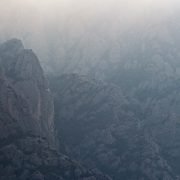 Claudia den Boer – To pick up a stone
Scroll to top